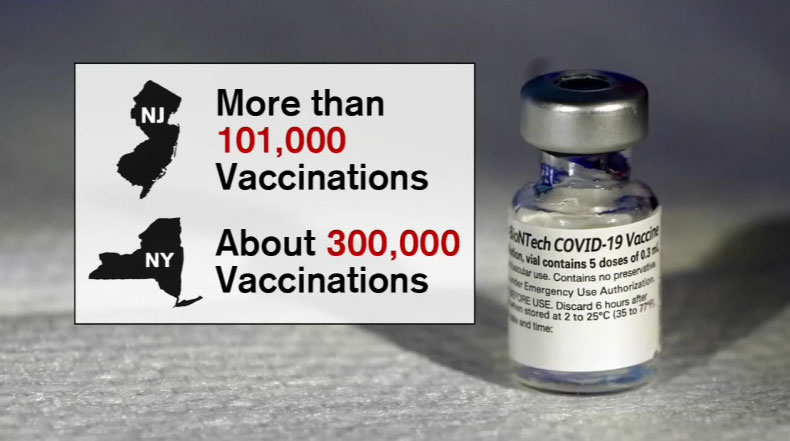 NEW YORK CITY (WABC) — A New York City frontline worker who was given the first COVID vaccine in the US received a second shot Monday.

Sandra Lindsay, the director of critical care at Long Island Jewish Medical Center (LIJ) in Queens, got the all-important second Pfizer dose to lock in immunity against the virus.

The second vaccination comes 21 days after her historic first shot. Lindsay received the first vaccine on December 14 with Governor Andrew Cuomo in attendance.

Officials say the Pfizer vaccine has been deemed 95% effective after the second dose.

Lindsay received it at the hospital where she oversees all intensive care patients. The second dose of the vaccine was administered by Michelle Chester, DNP, Northwell Health’s director of employee health services, the same clinician who gave the first shot seen round the world.

“I feel good,” Lindsay said. “I don’t feel any way different before I got it. I hope the vaccine is available to everyone as it was for me.”

Northwell has inoculated more than 22,000 employees with both Pfizer and Moderna vaccines since mid-December.

The second rounds aren’t just happening in New York City, but across the Tri-State area.

In an ambitious plan, Mayor Bill de Blasio is hoping to vaccinate 1 million people by the end of the month, even though all of the vaccination centers haven’t been set up yet and the city doesn’t even have a million doses of the vaccine — at least not yet.

The governor said his first priority is getting nursing homes vaccinated. The feds have ran that program and less than half received their first does.

Now the state’s jumping in to speed up the process, wanting all nursing home residents and staff to have the first doses.

Cuomo also said hospitals need to do a better job of managing the vaccine. Some are performing better than others, with New York City Health and Hospitals being at almost the bottom of the list in the amount of vaccinates distributed.

Moving forward, hospitals can face fines of up to $100,000 for not handing them out in a timely manner.

NewYork-Presbyterian has handed out the most doses in the state for its size, while NYC Health and Hospitals and Westchester Medical Center have distributed the fewest: 31 and 32%.